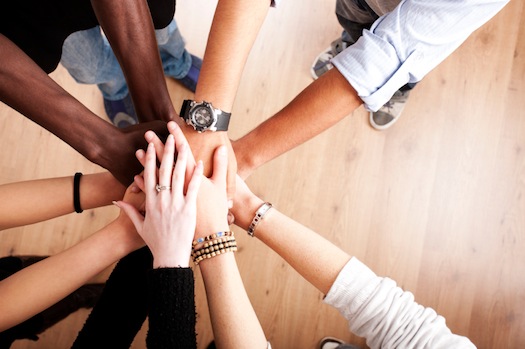 Those of us in the ICOC family of churches take pride (the justifiable type) in our racial diversity. Walking into most of our assemblies is mind-blowing to many first time guests, as well it should be. I love coming to our services, because I know I am going to see all kinds of brothers and sisters in Christ ─ the old and the young; the rich and the poorer; the formally educated and the self-educated; the dark skinned and the light skinned. What a wonderful group we are! We should be thankful for what we have. BUT…

But we should continually examine all aspects of what we have in the realm of racial diversity, for we have not arrived. That being said, we must also keep in mind that we will not arrive until we are in heaven, and are thus on a lifetime quest. To make a similar observation about being Christ-like is immediately understood. We should be thankful for what we now have in Christ, but we surely have no illusions already arrived at that lofty goal of being just like him, and will never completely arrive while still on this earth. We are thus on a lifetime quest to become more and more like him. If we understand and accept that application, why would we be shocked if the same type statement is applied to our racial diversity?

Have we arrived? Of course not. Perfection is a wonderful goal in multiple areas of life, but since we are not Jesus, we will fall short. That is where God’s grace comes in and where our grace with one another must come in. For example, has your family arrived at the apex of family relationships? I surely doubt it, unless your expectations are extremely low. I could go on and on about other applications of these principles, but they all show the same thing, including the area of race relations in the church. Let’s not allow unrealistic expectations and impatience to cause us to despair. And, let’s not use that statement to become dismissive about the urgent need to keep making positive improvements.

In the 2011 version of the NIV, you can find the phrase “make every effort” nine times (Luke 13:24; Romans 14:19; Ephesians 4:3; Hebrews 4:11; Hebrews 12:14; 2 Peter 1:5; 2 Peter 1:10; 2 Peter 1:15; and 2 Peter 3:14). Three of them have to do with unity in the church, which certainly speaks to the subject of race relationships (and all other types of relationships). Peter uses the phrase most, twice as many times as Paul, and three of his four usages are about giving very serious attention to Christian growth. Therefore, we cannot be complacent about spiritual growth, nor about any area within that growth. We thus cannot be complacent about growth in racial relationships.

I have repeatedly asked my white and black brothers and sisters to have honest conversations about racial issues in and out of the church. Are you doing it? Have you done it even with one person of a different race? I definitely am practicing what I preach on this one ─ having talks with not only those in the church, but those out of the church (who are often strangers initially). On one hand, I get frustrated when people don’t take initiative and have these talks. On the other hand, I know that structure would help, and we are heading more in that direction. One huge help will be the fantastic book by Michael Burns that I have mentioned before, “Crossing the Line: Culture, Race and Kingdom.” It is now at the printers and will be out soon, and likely a workbook to accompany and use it best will soon follow.

As I mentioned in a previous article, in Dallas we have had meetings to discuss various issues involved in race relationships, led by brothers of color (Hispanic and Black) starting with the ministry staff, then the whole Singles Ministry, and soon, with 250-300 small group leaders, assistants and wannabes. My involvement in this effort began with an invitation to speak on the subject, and our leaders (Todd Asaad in particular, our white congregational evangelist) have taken the subject very seriously since. I know of no church in our movement that offers more different types of opportunities to meet so many different needs, and thankfully, the racial relations need is among them. I might mention that Dallas is not only one of our larger congregations but one of our more consistently growing ones. I pray that these facts and this example helps other church leaderships to take action in this vital area.

So, what about our racial diversity? We know what we have; do we know what we do not have? Likely not, unless you have regular conversations with those of different races to get their perspectives. I appreciate that we are improving and having more conversations, but we are just getting started as a movement. I would like to live long enough to see a lot more progress, and I’m an old guy now. So let’s pick up the pace!

Let me start out with this illustration. Our movement began planting churches in other nations several decades ago, and we now have churches in well over 100 nations. That is amazing and amazingly wonderful. Thank you, Lord! When we started planting churches, we just went with what we knew, and planted American type churches on foreign soil. I remember visiting churches in various nations in the late 1980s and early 1990s. The languages were different, but everything else was just like “back home.” I couldn’t sing the words of the songs, but I could hum the tunes, because they were “our” songs translated in foreign languages (to me). While I’m very grateful for those early beginnings and the thousands of souls saved, we had yet to learn that cultures should be strongly considered in how we “do church” in churches outside the US.

A few years back, I was invited to help with some leadership consulting in Brazil. The church service was quite different than what I was used to. I didn’t recognize a single song, if I remember correctly. Not only were the words foreign to me, so were the tunes. They had written all of their own songs, each of them based on the words of Scripture. It was magnificent! This was Brazilian church, not American church. In the early days, we only knew American church; we had to learn local culture and customs to adapt how we did church to those cultures. It took a while, because we didn’t realize how Americanized we actually were. What we did wasn’t a sin; we just didn’t know better until we made a conscious effort to learn better.

The same application can be made to our churches in America. Because we are a blending of races and cultures, we have to sort out the differences among us and figure out how those differences should show up in how we do church. The ICOC had its start in a predominantly white church in Florida, but a church committed to evangelizing those of all races. Blacks, Hispanics and Asians quickly became a part of the membership.

But for all intents and purposes, it was still a white church. By that I mean that the leaders were nearly all white; the services were conducted in the traditionally white way; and the practices of the church were generally the same as any predominately white church. Was there anything wrong with that approach? No, at least not at first. The question is, did we go on a quest to learn what those of other races and cultures thought about what we were doing? Not really, or at least, not quickly (if ever).

In some ways, we learned more quickly how to adapt to foreign cultures than we did to our own mix of cultures at home. How does the lack of adaptation show up? In many ways, more than I am personally aware of, being white and being accustomed to my church traditions.

Membership Composition and the Community

That being said, I’ll ask a few questions to promote opportunities for discussion among our diverse members. Let’s begin by thinking about the composition of our local church membership? Does it reflect the city and community of which we are a part? Is the racial mix inside our assemblies about the same as the racial mix in the communities where we live and where we meet?

Let’s reduce the tension for a moment by looking at a known issue among our churches that it not race related. Consider the composition of our Singles Ministries. Most of these ministries are out of balance, having more sisters than brothers. Many sisters in such cases are feeling a lot of emotions. They aren’t getting asked out on dates very often and they are feeling that their prospects of getting married and having a family are almost nil. Yet at their workplace, men are “hitting” on them regularly, and not without some success borne out of desperation on the part of our sisters, sadly.

No Real Basis For Fears

This all hopefully sounds good in theory, but the main hindrance to putting it into practice is the fear factor. We have some fears in reaching out to folks just like ourselves; many of us have even more fears in reaching out to folks not like us. Honestly, our fears are satanically induced and not based on fact. For example, I share with total strangers of all races indiscriminately. I have had only a few, very few, cut me off or speak to me rudely or harshly. The typical response of those not interested usually goes something like this: “Thank you, but I’m not really interested.” They may add the reasons for their lack of interest, but they are not rude or harsh in response to my sharing.

We were a part of the Boston church for 16 years, during a time when the church received occasional negative publicity in the local news (both on TV and in the newspaper). All of the negative responses I can remember ever receiving when sharing took place in Boston. However, there were only four on that list that I can recall. One was a black man, who just told me he had nothing to say to me and didn’t want to hear anything from me. Then there was one white guy, who initially said “No Thanks,” but then muttered something to himself as he walked away. One white middle aged woman said she had read about our church in the newspapers, and kept walking. Another white woman in a store overheard me sharing with the cashier and rather bluntly asked me to stop sharing my faith.

Fears Can Be Conquered!

The white guy I mentioned was connected with an interesting realization on my part about myself. Somehow it dawned on me that I was most intimidated by educated white guys (not surprisingly, since I was the son of a bricklayer from the wrong side of the tracks). So, I purposely went to Harvard Square in Boston at about the time most people were leaving work and started sharing with those types to help overcome my fears. Although the one white guy who muttered something almost under his breath was a negative term describing me, he was the only one who responded negatively. The good news is that my plan worked and I lost my fear of the white “suits” with whom I was sharing. Fears can be overcome! As Emerson put it, “Do the thing you fear to do and the death of fear is certain.”

God Can Make It Work

Why do I mention these occurrences? Because through the years I have shared my faith with thousands of people and these are the only ones I can remember who responded to me negatively. And I have a great long-term memory (even if I sometimes forget my zip code!).